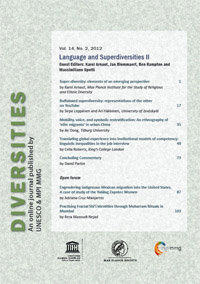 Super-diversity: elements of an emerging perspective
by Karel Arnaut, Max Planck Institute for the Study of Religious and Ethnic Diversity
»read the full article
Abstract and Keywords

This paper is an attempt to reflect upon diversity in contemporary globalising society from within the disciplinary frontier of anthropology and sociolinguistics. Like the paper of David Parkin (infra) Arnaut’s is an attempt to device new frames of reference for the sociolinguistic study of super-diversity. Here Arnaut explores the potential of ‘super-diversity’ as a perspective or lens for looking at diversity as discourse and as social practice. The paper first looks into the notion of super-diversity, which marks a sea-change in the global design of transnationalism. Moreover, super-diversity seems to indicate that a new approach is needed to replace the model of orderly multiculturalism by taking into account the fluidities and complexities of diversity in the age of heightened mobility and digital communication. Second, this paper recognises that over the last two decades a hegemonic ‘diversity’ discourse has emerged in a ‘post-panoptical’ configuration of governmentality that manages these complex forms of diversity. The challenge of the super-diversity perspective is to relate to this hegemonic discourse while not losing track of the exciting dynamics of messy and creative commonplace diversity in every-day interaction and low-key cultural production. In order to perform this task, the paper proposes a ‘critical sociolinguistics of diversity’ that is presented as part of a new moment in the post-colonial history of the human and social sciences, almost half a century after the earlier decolonising moves by scholars such as Johannes Fabian and Dell Hymes.

Buffalaxed superdiversity: representations of the other on YouTube
by Sirpa Leppänen and Ari Häkkinen, University of Jyväskylä
»read the full article
Abstract and Keywords

In this article, we investigate how the oriental Other – increasingly a diversifying being – is represented in the context of translocal YouTube culture. More specifically, we look at videos which through subtitling and editorial commentary entextualize and resemiotize the figure of the Other to western audiences. We will take a close look at three typical ‘buffalaxed’ videos and investigate how each of these constructs images of the Other that are both divergent from the image transmitted in the source video as well as quite ambiguous and multi-layered. On the basis of our analysis, we will argue that while the videos repeat and remodify aspects of the stereotypical and discriminatory Western heteronormative metanarratives of the Orient, they also depict the Other in ways in which his/her otherness is no longer the simple anti-thesis of ‘Us’ – the western subject – but, occasionally, aligned with or even very much like ‘Us’.

In this paper I explore class (re)stratification of the contemporary Chinese society through the use of various semiotic resources by a group of ‘elite migrants’ who are highly mobile within the country as well as globally. I identify two sets of semiotic resources and argue that they are different forms of voice articulating the different angles and directions of class distinction. The first set of resources are external criteria of group membership, expressed by their control of languages – Putonghua and English – that are not tied to one place but offer the mobility that characterizes their social class. The second set of resources are internal criteria of membership (‘mensao’) connected to and predicated on knowledge of particular consumption commodities. The fieldwork data demonstrate a multidimensional complex of voice, internal as well as external and with several scales being oriented towards. Through these resources the elite migrants create an identifiable ‘middle class’ voice in contemporary China.

The job interview is a key gatekeeping site where the tension between institutional standards and diversity is most evident. Despite equal opportunity policies, the linguistic demands of the interview are more likely to exclude migrants from work in the higher tier labour market. The selection interview creates a linguistic penalty against certain migrant groups and this is well illustrated in the problem of foreign work experience (FWE), its recognition or not, the limitations of its use and the additional communicative demands it creates. Using examples taken from a data base of 61 video- recorded UK interviews for low-paid jobs, this paper shows the discursive regimes that position migrant applicants as less capable within the competence-based interview. FWE can be dismissed by interviewers or, where it is accepted, requires additional linguistic and interactional work to manage the extra contextual and equivalences burden. The unfamiliarity or assumed irrelevance of FWE is brought into the interview, and its power to distance and ‘other’ candidates of migrant background is brought about interactionally as candidates’ linguistic resources in defending it are made vulnerable under the interviewers’ gaze. By contrast, British born candidates, whatever their social identity, can use their local work experience to tell stories that fit with the competency framework. The language of job interviews contributes to the production of inequality and also masks the contradiction between apparent fairness and unequal outcomes.

This paper presents extensive commentaries and reflections on most of the papers in this special issue (with the exception of Arnaut’s contribution) as well as in the previous Language and Superdiversities special issue (Diversities 13/2). The papers of David Parkin and Karel Arnaut are both attempts to device new frames of reference for the sociolinguistic study of super-diversity. Here Parkin argues that the use of semiotic resources does not unambiguously classify social strata and ethnic groups but creates and draws from communicative outlines that cut across them and blur their contours. This has two consequences. One is that contemporary polylanguaging is an ontological act on the part of speakers to empower themselves or to project a desired or appropriate personal image, perhaps in accordance with some kind of network membership but not tied to a domain or topic in the broader sense given above. The other is that this creation of identity is through semiotic stylisation, which by nonstandard means projects new identities or reinforces existing ones.

Engendering indigenous Mexican migration into the United States. A case of study of the Yalálag Zapotec Women
by Adriana Cruz-Manjarrez
»read the full article
Abstract and Keywords

This article explains the Shi’a-Muslims in Mumbai as a fractal society, a social organisation constituted of numerous social segments, each with its own shape and structure. As a result, this article refers to Shi’i identities, not one single Shi’i identity. In particular, the discussion explores how the fractal organisation of Shi’a society and diverse Shi’i identities are practised through Muharram rituals. This paper shows that each Shi’a community has invented and reinvented its identity over time through Muharram rituals, and that Mumbai as a cosmopolitan city has intensified the need for the reinvention of identities.