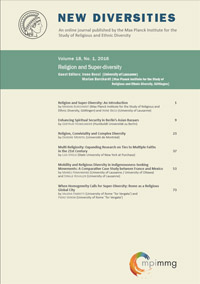 Religion and Superdiversity: An Introduction
by Marian Burchardt (Max Planck Institute for the Study of Religious and Ethnic Diversity, Göttingen) and Irene Becci (University of Lausanne)
»read the full article

Reunited Germany is increasingly characterized by new groups of immigrants, particularly since the recent arrival of refugees from Syria and various other places. Like many migrants before, they bring along religious imaginaries and practices, thereby contributing to the diversification of the religious landscape. Churches, mosques, shrines, temples and other places of worship function as new markers of place-making in the urban sacred. Based on ethnographic fieldwork among migrants in multi-ethnic bazaars in Berlin, this paper seeks to explore the performance of religious practices in superdiverse marketplaces, where Vietnamese and other ethnic groups ask spirits and gods for protection in localities increasingly characterised by economic insecurities. Simultaneously, traders from various countries respect and tolerate each other’s diverse religious and ethnic backgrounds, thereby enacting cosmopolitan sociability in the hustling and bustling Berlin Asiatowns.

Religion is often presented as a likely cause of social division and conflict. However, research on religious groups carried out in Montreal and several other areas of Quebec shows that in religious contexts, persons from different ethnic minorities connect with each other and, importantly, with those of native-born, majority background. I focus on the affinities, solidarities and convivialities that arise in contexts of complex diversity in Montreal and in smaller regional towns and cities in the province. Conflicts and tensions arise along ethnic lines in some of the religious groups we studied in Quebec. Nevertheless, the convivialities that complex diversity has occasioned in the religious domain are much more evident in our findings. These include religious communities where ethnicity is secondary as well as interreligious collaborations involving members and leaders from different religious traditions. Such initiatives are particularly evident in regional towns and cities.

Multi-Religiosity: Expanding Research on Ties to Multiple Faiths in the 21st Century
by Liza G. Steele (State University of New York at Purchase)
»read the full article
Abstract and Keywords

In the 21st century, it is not uncommon to encounter people with ties to more than one religion. Some examples of such multiple or dual religious ties (referred to as “multi-religiosity” for the purposes of this paper) include the practice of Buddhism among Christians and Jews, regular church attendance among those who say they are not religious, and the children of mixed religious couples who might be raised with some level of identification with the spiritual traditions of both parents. Yet, literature and data on the topic of multi-religiosity is scarce. Through an analysis of qualitative data gathered by the author in Brazil in 2007–2008 and data from a poll conducted by the Pew Research Center’s Forum on Religion and Public Life in the United States in 2009, this paper aims to draw attention to the prevalence of dual or multiple religious ties in 21st-century Western countries, and to encourage a reconsideration of traditional concepts and categories in scholarly approaches to studying religion.

In this article, the authors seek to explore spiritual diversity as seen in two contemporary movements that arose in the wake of the New Age and the “2012 Phenomenon”: Mexican neo-Mayanism and French Celtic neo-shamanism. They examine the relationship between the dual mobility of leaders (geographic and spiritual) and the hybridization of symbolic references by focusing on the set of objects, accessories and ritual clothing used by adherents in spiritual practice. Their analyses are based on ethnographic research carried out in France and Mexico between 2012 and 2014. The objects are analyzed in terms of symbolic rearrangements, identity innovation and coexistence of referential systems (glocalization). The authors’ analyses reveal that despite the globalized character of the New Age, the practices and discourses of these groups are heavily influenced by the transnational life pathways of their leaders.

This article addresses the way religious diversity is ‘taking place’ in Rome. In particular, it brings some religious manifestations into a broader understanding of the diversification of religious spaces in the city. Instead of seeing diversity as an unintended consequence of global flows, we trace it back to a sound religious spatial identity. Ever since globalization was set in motion, Rome has functioned as an attracting field of visibility for established religions. At the same time, the city has provided a shared grammar for inflecting diversity into religious idioms. Religious super-diversity as seen in Rome is the combination of a strong local religious identity that acts as a stage where old actors hope to be invited to give new performances and the audience itself is incessantly pushed to tread the boards. The article concludes with a tentative hypothesis that super-diversity may yield to postsecular modes of social life.