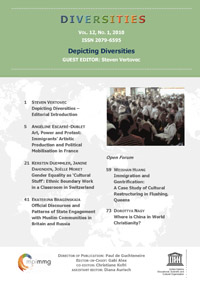 The mobilisation of second generation immigrants in the early 1980s in France has often been studied from the perspective of social movements and political participation. The presence of various forms of artistic creation as crucial vehicles for the expression of this generation has also been mentioned but rarely linked to the mobilisation itself. Drawing from an investigation on artistic initiatives conducted before and after the March for Equality and Against Racism in France (also referred to as the ‘Marche des Beurs’), this paper examines issues of representation, mobilisation and strategies of appropriation as expressed through artistic creation. It argues that immigrants’ artistic production contributes to the expression of minority-related demands by enabling particular interests to be represented and by challenging institutionalised interpretations of culture. It investigates the opportunity for immigrant artists to articulate minority-related demands through artistic creation and analyses the relationship between immigrant artists and cultural institutions.

The idea of boundary work has become a key concept in studies on ethnicity and provides new theoretical insights into the social organisation of cultural difference. People articulate ethnic boundaries in everyday interactions using conceptual distinctions to construct notions of ‘us’ and ‘them’. This study is based on an empirical case study (ethnographic fieldwork, interviews) with young people (16-21 years old) in a Swiss vocational school. The results emphasise that the moral imperative of gender equality is the most significant category used to create boundaries between Swiss and Albanian migrants. Our study considers boundary work as relational and thus examines the strategies of both the Swiss majority and the (male) Albanian minority. Results suggest that the boundary itself is seldom contested by either Swiss or Albanians, and we argue that the visibility of the boundary (‘brightness’) is closely linked to larger power relations in society between those groups.

The article discusses the institutional complexities and policy discourses of Muslim governance and representation in Britain and Russia in light of the distinct national narratives of state-Muslim relations. Religious governance is not only determined by the patterns of state-religion relations but is also influenced by the level of state involvement. The article focuses on a series of interactions between state officials and Muslim representative institutions to highlight individual patterns and discourses of the two approaches to religious accommodation: ‘horizontal’ and ‘vertical’. The British horizontal approach focuses on liberal multiculturalism and its communitarian preference for resolving internal tensions within local communities. Russia’s increasingly conservative policy of consolidating Muslim institutions and building strong relations with official Muslim representatives is typical of the vertical approach. Over the last 10 to 15 years, state policies on Muslim integration and representation have revealed a similar desire to promote moderate forms of Islam. This is evident from extended programmes of state-funding for Muslim communities and stronger cooperation with Muslim representative institutions. A close analysis of state engagement with Muslim Councils brings to light the internal dynamics of horizontal and vertical state-Muslim relations in the two countries.

Immigration and Gentrification – a case study of cultural restructuring in Flushing, Queens
by Weishan Huang (Max-Planck-Institute for the Study of Religious and Ethnic Diversity, Göttingen)
»read the full article
Abstract and Keywords

The aim of this article is to introduce how culture and economics intertwine in urban re-structuring before and after the 1990 recession in New York City by using the case study of Flushing, Queens. My research will bring in a cultural perspective to contribute to the understanding of gentrification as economic, social and cultural restructuring under the impact of international immigration. First, this case of neighbourhood transfiguration was initially triggered by a private immigrant developer, not a cooperation, whose successes were based on factors including Taiwanese immigrants’ residential and housing preferences in the 1980s and 1990s. Ethnic residential preference and cultural tastes are cultural factors which accelerated gentrification during the early 1990s recession. The residential pattern of Asian immigrants in New York has showed the continued concentration of ethnic enclaves since the 1980s. Secondly, there has been diversification in Flushing since the 1980s, which is different from the kind of gentrification which creates a social, economic, and racial hegemony in a neighbourhood. The diversification of races and ethnicities in this neighbourhood has increased since the 1980s through the contribution of post-1965 and later post-Cold War immigrants, especially the settlement of Asian immigrants. We need to distinguish between gentrification that creates homogenous racial or ethnic communities that push immigrants out, and this new form of super-diversity gentrification, based on a transnational flow of capital that fosters diversity and uses diversity as a form of investment capital.

Where is China in World Christianity?
by Dorottya Nagy (Max Planck Institute for the Study of Religious and Ethnic Diversity, Göttingen)
»read the full article
Abstract and Keywords

Recent years have witnessed an articulated attention given to ‘China’ as a rising economic power. Parallel to this economic perspective, a renewed attention to the relationship between China and Christianity has also started to become verbalised in speeches of such prominent persons as the Archbishop of Canterbury, the Pope and the general secretary of the World Council of Churches. China is accentuated on the agenda of missionary organizations. Where do fascination and passion for China come from? How does this China-fever influence certain processes within contemporary World Christianity? Where is China in World Christianity today? The present article aims to contest the oversimplifications exercised in the China question and maps the complexity of trajectories involved in the question of the China-World Christianity nexus. Looking at certain examples of global-local dynamics, the article aims to localise ‘China’ in its relation to World Christianity and vice versa. In doing so, the article focuses on issues such as transnational communities, ecumenical understanding, contextualisation and theological pluralism. The present contribution argues that the ‘where’ question in this case poses the challenge of moving beyond the geographical and numerical mappings. In order to understand the multiple theological connotations of the ‘where’ questions, the article proposes a new missiological-ecumenical approach which perceives ‘super-diversity’ as a guiding principle for the integrity of World Christianity.