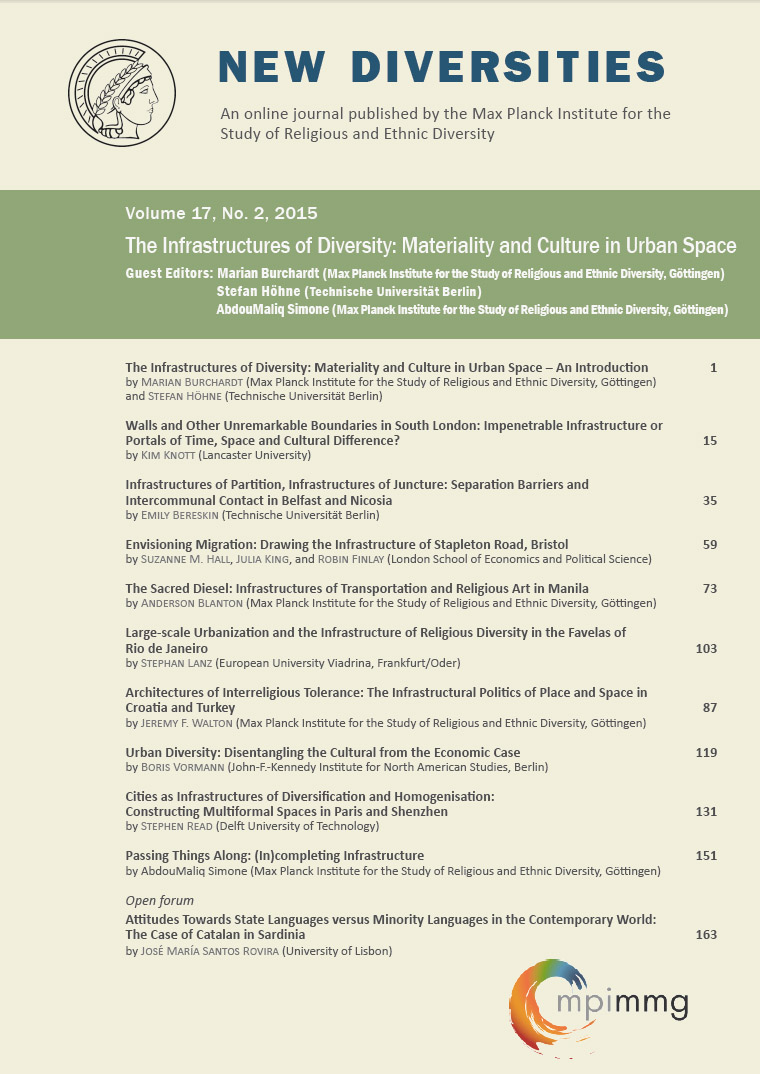 The Infrastructures of Diversity: Materiality and Culture in Urban Space – An Introduction
by Marian Burchardt (Max PIanck Institute for the Study of Religious and Ethnic Diversity, Göttingen) and Stefan Höhne (Technische Universität Berlin)
»read the full article

Walls and Other Unremarkable Boundaries in South London: Impenetrable Infrastructure or Portals of Time, Space and Cultural Difference?
by Kim Knott (Lancaster University)
»read the full article
Abstract and Keywords

Seemingly impenetrable, urban walls, fences and other hard surfaces of the city do not seem likely contenders for social and cultural innovation and interaction. Generally, they remain unnoticed and unremarked upon. Yet broken, traversed, entered or excavated, they become visible and open to narration and imaginative (re)construction. These inconspicuous manmade structures, crucial for the management of urban life, for ensuring the efficient flow of people and traffic, and for securing public and private property, have counter-cultural potential. As boundaries for keeping people and objects out or in and for separating human activity on the surface from what is below ground, they may permit access to previously hidden times and places, and may allow new encounters to take place. Drawing on data from a research project on “Iconic Religion”, I eschew London’s iconic sites for the forgotten infrastructure in their shadows, and ask what new social relations and cultural imaginaries are generated by the wall separating a church from a market, a construction site behind a mosque, and a gate to a disused graveyard on land owned by Transport for London.

Through an analysis of Belfast, Northern Ireland and Nicosia, Cyprus, this article considers how separation barriers catalyze social mixing and cooperation in ethnonationally divided cities. Due to their highly visible and symbolic nature as well as their physical location at the interface between communities, I argue that the barrier is a critical infrastructural element whose management and symbolic interpretation can motivate intercommunal cooperation – just as it can incite conflict. This article analyzes four socio-material interventions designed to ameliorate spatial and social divide: 1) the regeneration or aestheticization of barriers; 2) the negotiation of border openings; 3) the use of the border as a catalyst for intergroup activities; and 4) the creation of shared spaces at the boundary line. I discuss the possibilities and limitations of these practices both as confidence-building measures and as activities that foster social mixing. The article concludes by querying if barrier projects may inadvertently funnel funding away from more localized, single-community peacebuilding activities.

This paper is an exploration of the different ways drawing can be practised to understand how migration shapes the infrastructure of the so-called ‘British’ high street. The research emerges from a cross-disciplinary study of migrant economies and spaces on Stapleton Road,
a high street in a comparatively deprived and diverse part of Bristol, UK. Our primary aim is to contribute to discussions about the role of drawing as a critical visual practice in social research, highlighting methodological and substantive potentials. The second aim of our paper is to elaborate on the relationships between urban migration, urban marginalization and ‘migrant infrastructure’ (Hall, King and Finlay 2016), and we visualize through four drawings, how power, materiality and place constitute the infrastructure of Stapleton Road. We engage with infrastructure as a lively system of shared resources that situates migrant entrepreneurs in the city, and is configured by an array of migration processes across time and space. We suggest that drawing is an exploratory and critical visual practice, providing us tools to see socio-spatial relationships in temporal and scalar dimensions. To ‘envision’ migration is to encounter and re-present the varied dimensions of street life in relation to the structural production of urban migration, marginalization and diversity.

The Sacred Diesel: Infrastructures of Transportation and Religious Art in Manila
by Anderson Blanton (Max Planck Institute for the Study of Religious and Ethnic Diversity, Göttingen)
»read the full article
Abstract and Keywords

This paper describes the development of a vernacular form of religious art upon the surface of the Jeepney, one of the most popular modes of public transport in the Southeast Asian megacity of Metro Manila. Through a focus on the pious visual culture of the crowded streets of Manila, the essay proposes a new way to describe and theorize paratransit, or informal modes of urban transportation. By examining the Jeepney and its religious images, the paper demonstrates how this form of paratransit has refashioned the urban landscape into a mobile network of miraculous appearances, communal prayers and divine blessings.

Large-scale Urbanization and the Infrastructure of Religious Diversity in the Favelas of Rio de Janeiro
by Stephan Lanz (European University Viadrina, Frankfurt/Oder)
»read the full article
Abstract and Keywords

This article argues that the diversification of the religious landscape in the favela of Rio de Janeiro is closely linked with its historical and current governance constellations, the production and regulation of its infrastructures, and the materiality of its urban spaces. To this end, this study first lays out how the modes of regulation governing the favela and its infrastructures have developed historically in the dynamic interrelationship between residents, local actors, and state apparatuses. Using four adjoining favelas as an example, I analyze the religious transformation in recent decades as it is reflected in the history of the favelas as well as in the precarious nature of its infrastructure and socio-economic conditions. I suggest that the entrepreneurial self-made religion created by ordinary favela residents should be understood as an infrastructure, in the sense that it works as a platform that provides for and reproduces life in the favela. Finally, I will show that the authoritarian implementation of a large-scale public infrastructure program within this configuration not
only further entrenches a historically developed power structure based on violence but also specifically curtails those religious infrastructures that the inhabitants have created themselves in accordance with their needs.

Architectures of Interreligious Tolerance: The Infrastructural Politics of Place and Space in Croatia and Turkey
by Jeremy F. Walton (Max Planck Institute for the Study of Religious and Ethnic Diversity, Göttingen)
»read the full article
Abstract and Keywords

Drawing on research conducted at a mosque in the Croatian port city of Rijeka and an integrated space of worship (a “mosque-cem house”) for Sunni and Alevi Muslims in the Turkish capital of Ankara, this essay traces the divergences between discursive practices and spatial practices in relation to infrastructures of religious diversity. After developing a theoretical model based on Michel de Certeau’s distinction between place and space, I examine the shared discourse of interreligious tolerance and pluralism that framed both Rijeka’s New Mosque and Ankara’s mosque-cem house. Following this, I analyze the radically different spatial practices choreographed by the two projects: the spatial “mixing” of distinct religious communities and forms of worship in the case of the mosque-cem house, and the spatial separation and sequestration of Islam in relation to the city and nation at large in the case of the New Mosque. I argue that the contrast between the politicization of the mosque-cem house project and the near-unanimous approbation for the New Mosque stems from this contrast in spatial practices. The essay concludes with a vignette from the neighborhood near the mosque-cem house that draws attention to the potential contradictions between infrastructures of diversity and more protean forms of social, cultural, and religious plurality.

For many planners and city branders a pluralistic urban society, variation in architectural styles and mixed-uses render cities creative, competitive and more livable. Diversity, as the new orthodoxy in urban planning and policy, embodies the opposite of earlier, top-down modernist planning ideals. Reading diversity as a cipher for the market, as I set out to do in this article, lays bare the normative trajectories of these discourses of diversity. In so doing, I make two arguments. First, while it is often assumed that urban diversity makes cities more cosmopolitan and more economically productive, I contend that the cultural and economic logics of diversity are not mutually re-enforcing, but can often contradict one another. The same regime of market rule that supposedly leads to more diverse and livable postindustrial cities, produces increasing spatial inequalities. Second, I suggest that a perspective that highlights the structuring force of physical urban infrastructures sheds light on these pathdependent patterns of segregation, thereby allowing us to understand struggles over place and meaning in ways that move beyond the current limitations of diversity discourses.

Cities as Infrastructures of Diversification and Homogenisation: Constructing Multiformal Spaces in Paris and Shenzhen
by Stephen Read (Delft University of Technology)
»read the full article
Abstract and Keywords

Cities have made urban people. Cities are the material condition of complex urban societies and people have been actively formed in them as products of and complements to the politics and economies that cities have engendered. Urban identities and economic roles have formed and massively differentiated and complexified beyond those of pre-urban and rural societies. People have diversified as economic roles especially have divided and formed them around organising and integrating cultures and practices. Cities have, at times and under particular conditions, been diversifying infrastructures, but cities have also, in different times and under conditions of modernisation, industrial rationalisation and the rescaling and financialisation of economies, become infrastructures of homogenisation. In historical and at least partly contingent processes cities have complexified and opened rich and diverse opportunities for livelihoods in particular times and places and decomplexified and closed and diminished opportunities in others. The paper will take the reader on an historical journey through a number of iconic cases, starting in medieval Paris and finishing in contemporary Shenzhen to demonstrate that processes of diversification continue, still today, to open urban lives and livelihoods to urban newcomers, while modernising and homogenising processes threaten those lives and livelihoods.

Infrastructure not only concerns the movement of things, but also is itself a movement. It is a movement that gathers up remnants, the disparate, and that which has been cut loose from discernible modes of belonging. This is the case even though we may acknowledge its concretized and stalwart features, its violent inscriptions, heavy sunk costs, and ephemeral architectures of financing. Infrastructure is a movement in perception, not simply by constituting multiple vantage points or lines of articulation, but by pointing out how things are constantly coming undone, playing with a risk that it is really able to hang together across actual and potential perturbance, that it can displace the possible salience of highly localized conditions, triggers, and alterations by always shifting loads, acting as if it is always somewhere else than it is.

Attitudes Towards State Languages versus Minority Languages in the Contemporary World: The Case of Catalan in Sardinia
by José María Santos Rovira (University of Lisbon)
»read the full article
Abstract and Keywords

The dichotomy of state language versus minority languages is a well-known subject among linguists. However, there are several competing perceptions of the role that minority languages play in society. In Italy, Catalan is a minority language and has been spoken for centuries in the Sardinian city of Alghero. Today, however, its survival is uncertain. Why have Algherese people progressively abandoned the Catalan language over last few decades? To answer this question, we begin by reviewing the range of scholars‘ interpretations of the motivations and attitudes that lead people to reproduce or abandon minority languages. In this article, I argue that there is an unavoidable link between social systems and linguistic practices that determines the consolidation or extinction of some languages, as has happened in Alghero, where the traditional language is at risk due to changes in social structure.