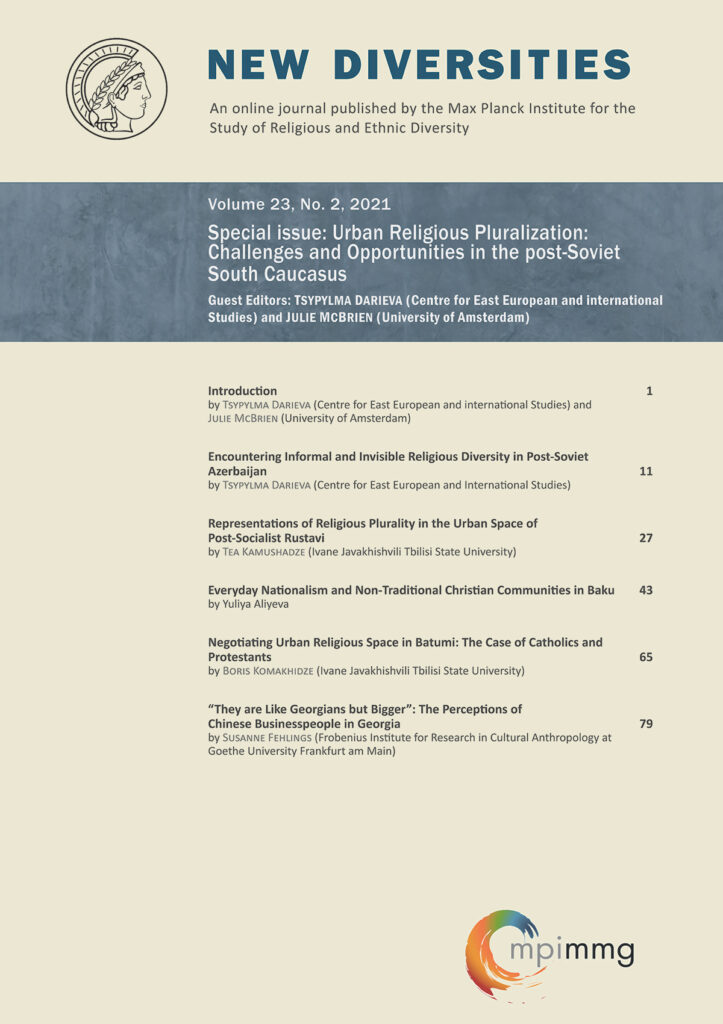 This paper explores religious place-making as part of informal religious pluralization in autocratic Azerbaijan and examines how restrictive top-down state regulations may affect less institutionalized faith communities. It does so by focusing on the process of negotiation and a set of religious practices aimed at the symbolic and material appropriation of urban spaces. How do less institutionalized ‘practitioners’ and urban religious leaders respond to the shrinking space for religious freedom, and how are faith practices mediated in concrete spaces? To answer these questions, I provide two empirical examples of religious place-making in Baku, a vernacular Shia sacred site on the one hand, and the Bahai community, a non-Muslim religious minority, on the other. Without suggesting that these examples exhaustively capture the dynamics around religious pluralization, I draw attention to the interplay between the ideological power of state interventions and informal and creative religious place-making in the city. The contribution identifies the restrained visibility of folk shrines and the invisibility of Bahai practitioners that become part of an urban social reality and mundane use of urban and residential spaces. By sharing space with non-religious actors, religious practitioners use a variety of urban spaces on a temporary basis.

This paper focuses on the urban environment and topography of the religious architecture of the city of Rustavi, which establishes a new hierarchy and order in the former workers‘ city. After the collapse of the Soviet Union, there was a sharp transformation in religiosity across the country, largely due to the construction of new religious sites, the restoration of old buildings and the rebuilding of various sites of worship. Another layer that was revealed after the collapse of the Soviet system was the emergence of new religious groups that competed fiercely and that actively began seeking their place in the post-atheist, post-secular space. The scarcity of resistance to co-existence and the search for forms of it are controversial in the urban setting, where religious symbols, in addition to their sacred significance, possess national and political meanings. Based on my ethnographic fieldwork, I examine different spatial practices and interpretations that frame the co-existence of the mainstream Georgian Orthodox Church, Georgian Catholics and the Muslim community in Rustavi. I argue that the struggle for religious spaces blends with the city’s genesis in the Soviet period, which involved reviving the historic city and endowing it with an international, industrial profile. These two contradictory faces of the city, both created by the communists, are present in religious forms today and enable the search for new identities.

This article explores the non-traditional Christian Communities (NTCCs) in Azerbaijan and discusses the ‘situatedness’ of these ‘new’ religious groups in relation to the national authorities, local communities, and transnational evangelical movements. While contributing to the pluralization of the religious terrain in the post-soviet country, these transnational religious movements are perceived as disruptors, bringing complications to the established religious ‘status-quo’, and re-defining religion as a matter of personal choice rather than a nominal status acquired at birth. Drawing on ethnographic observations, the paper demonstrates how the production of the ‘patriotic narratives’ helps these communities to challenge the regime of ethnodoxy and adopt the ‘hybridized identity’ loyal to the tenets of Azerbaijani civic patriotism and committed to the goals of the transnational faith communities. The appropriation of the ideology of civic nationalism by the NTCCs can be perceived as one of the coping strategies used by these communities to negotiate for wider recognition and acceptance with the authorities and host communities..

This article addresses the way post-Soviet religious visibility and materiality are taking place in the Georgian port city of Batumi through the organization of sites of worship by the Christian religious minorities. In particular, it attempts to understand the strategies of Catholic and Protestant religious communities to materialize their religious identities in post-Soviet Batumi, something which predominately proceeds alongside the arrangements of the majority religious community. This article is based upon ethnographic research in Batumi where political ideologies have constantly determined the religious identity of the city. Focusing on the small Christian communities in Batumi and their strategies of post-Soviet religious revival through materializing sites of worship in the city, I investigate post-Soviet public religiosity in the multi-religious urban area, where encounters of mainstream faith and religious minorities characterize the religious identity of the city. More specifically, I argue that increasing the power and dominance of the major religious organization determines the public religious landscape of post-Soviet Batumi where organizing Catholic and Protestant places in the urban area of the city is characterized by the consequences of the public visibility and materiality of power of the Georgian Orthodox Church.

Susanne Fehlings (Frobenius Institute for Research in Cultural Anthropology at Goethe University Frankfurt am Main)
“They are Like Georgians but Bigger”: The Perceptions of Chinese Businesspeople in Georgia

This article looks at Georgians’ perception of Chinese businesspeople in Tbilisi. Although Chinese communities can be found almost everywhere across the globe – including in the Middle East, Sub-Saharan Africa, Western Europe, Russia, Central Asia, the Americas, South and East Asia, etc. – the Chinese presence in the Caucasus is a relatively new phenomenon. My analysis of case studies in Georgia, where the Urumqui-based Hualing Group is perhaps most powerful Chinese investor, challenges the assumption that differences between groups predominately create conflict and mistrust. It also challenges the hypothesis that trade and business networks is built on cooperation of ethnic and religious ties and communities. Instead, it gives examples of how common economic interests and shared social practices create a mutual understanding, and how this understanding is explained and experienced by Georgians.