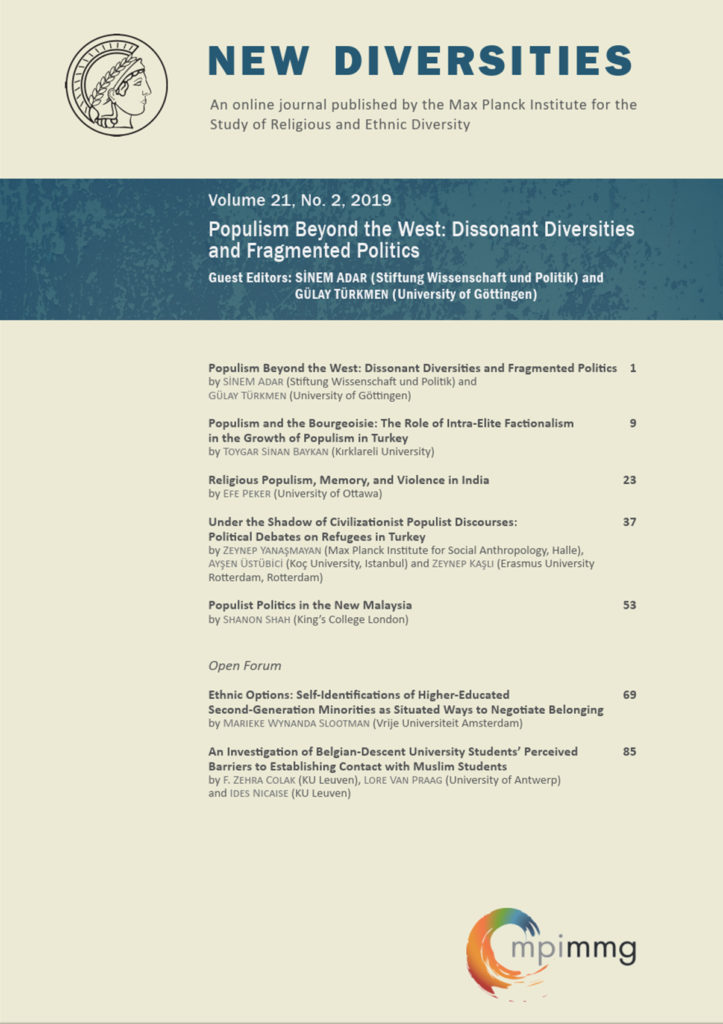 Toygar Sinan Baykan (Kırklareli University)
Populism and the Bourgeoisie: The Role of Intra-Elite Factionalism in the Growth of Populism in Turkey

This paper seeks to examine the role of upper-class elements in the rise of contemporary populism by focusing on the socio-cultural divide and factionalism within the Turkish business class. Current scholarship on populism revolves around the discursive, strategic and stylistic-performative dimensions; but the revival of populism—and the reaction against it—in our age has its own political sociology based on various coalitions of distinct social forces with diverging economic and mobilisational capacities and resources. Classical and contemporary studies analysing the social bases of populism have overwhelmingly focused on the role of lower socio-economic segments. This paper, in contrast, deploys a historical and socio-cultural analysis to highlight the role of upper-classes in the rise of populism today, and argues that economic and socio-cultural factionalism within the bourgeoisie paves the way for the “underdog” bourgeois factions to support populist politics.

While the literature on right-wing populisms has focused on the phenomenon as an ideology, political style, and economic policy, populist interaction with religions, especially in non-Western cases, remains underexamined. Contributing to the study of religious populism, this article discusses the case of hindutva (Hindu nationalism) in India, concentrating on Narendra Modi’s Bharatiya Janata Party (BJP), in power since 2014. From a social movements perspective, the analysis amalgamates three interrelated components: framing practices, mobilizing structures, and political opportunities. Regarding framing, the article deals with how the BJP redefines national identity and historical memory in exclusive association with Hinduism—at the expense of religious minorities. Concerning mobilizing structures, the BJP’s grassroots network Sangh Parivar is examined as an extensive set of organizations promoting Hindu pre-eminence, as well as the personalized communication tools centred around Modi himself, fostering a quasi-sacralised image of the leader. Finally, post-1980 sectarian violence is recounted as a key political opportunity that facilitated the BJP’s consolidation of power. Illustrating the aggressive articulation of Hinduism by the BJP via these three mechanisms, and incorporating an array of data such as the declarations of key figures in the movement, movement websites, newspaper articles, reports, as well as other historiographies and analyses, the article makes two theoretical propositions. First, it contends that a social movements outlook allows for a broader analysis of populism, one that takes into account grassroots forces and historical progression, which goes beyond understanding it merely as a rhetorical people-elite distinction. Second, it argues that religion warrants more attention in the literature as a cultural component of contemporary populisms. Shifting the focus to non-Western cases would help advance the study of the populism-religion nexus in its culturally and geographically variegated forms.