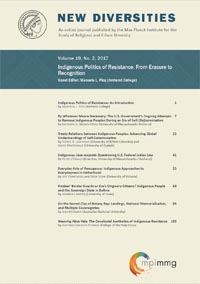 By Whatever Means Necessary: The U.S. Government’s Ongoing Attempts to Remove Indigenous Peoples During an Era of Self-(De)termination
by Kathleen A. Brown-Pérez (University of Massachusetts Amherst)
»read the full article
Abstract and Keywords

Since first contact with Europeans, Indigenous peoples have been in the way. In the United States, the federal government has enacted policies to further the goal of removing them. Initially, the most expedient way to clear the land was physical annihilation. Massacres, Indian wars, starvation, and disease reduced the Indigenous population significantly but not enough to satisfy the federal government or its citizens. Subsequent policies were considered necessary. They had different names and stated goals, but they served only one purpose: eliminate Indians. They can be assimilated into non-Indian culture until their Indianness is unrecognizable. They can be defined out of existence by a government that has taken control of the definitions of “Indian” and “tribe” in a way that excludes many Indigenous peoples. The actions by the U.S. government may have changed over the years, but the result is the same: fewer and fewer Indigenous peoples in the U.S.

United States “federal Indian law” consists of a body of rules rooted in the colonial doctrine of “Christian discovery.” Viewed through the lens of Carl Schmitt’s concept of “sovereign ban,” Christian discovery creates a “state of exception,” placing Native Peoples both inside and outside the constitutional order of the United States and simultaneously constituting the claim of U.S. sovereignty. The instability inherent in this double performance emerges as the “paradox of sovereignty.” Native self-determination efforts appear as lèse-majesté – ”insults to sovereignty” – heretical acts challenging Christian colonial domination.

Everyday Acts of Resurgence: Indigenous Approaches to Everydayness in Fatherhood
by Jeff Corntassel and Mick Scow (University of Victoria)
»read the full article
Abstract and Keywords

Indigenous activism and resurgence are often analyzed at the state or macro-level because of the high visibility and large-scale nature of these actions. However, as Kwakwaka’wakw scholar Sarah Hunt and Cindy Holmes observe in their 2015 article, “…the daily actions undertaken by individual Indigenous people, families, and communities often go unacknowledged but are no less vital to decolonial processes.” These are challenges that we take up in examining the “everyday” – those often unseen, unacknowledged actions that renew our peoplehood and generate community resurgence. This holds important implications for decolonizing our notions of time and place and increasingly Indigenous scholars, such as Maori scholar Brendan Hokowhitu (2009), find that Indigenous discussions of the everyday tend to be framed either in terms of “Indigenous political struggles, especially in regard to jurisprudence, or in terms of ‘victimhood’ conceived of as the genealogical descendent of the trauma of colonization”. How then can we re-imagine and re-assert Indigenous everyday actions that emphasize the intimate, lived experiences of Indigenous peoples? This article examines how the everyday can be an important emancipatory site for Indigenous resurgence against colonial power. Focusing on fatherhood and the everyday shifts our analysis away from the state-centered, colonial manifestations of power to the relational, experiential, and dynamic nature of Indigenous resurgence, which offers important implications for re-thinking gendered relationships, family health and well-being, and governance. These daily acts of resurgence, at the community, family and personal levels, can be critical sites of resistance, education, and transformative change.

Thomas Hobbes was the first major thinker to locate an imagined pre-political State of Nature in the Americas. Even his critics such as Locke and Rousseau followed him in seeing native Americans as living in a world which they imagined existed in pre-historic Europe and, most
importantly, beyond meaningful dialogue. These and other thinkers used America as a tool through which to think the status of the individual political subject and his relationship with the state. This article argues that indigenous people were much more than rhetorical tools but, rather, were necessary elements for imagining the modern nation state; they were in Shaw’s words, Hobbes’ ‘border guards’ (2008: 38). Indigeneity, however, does more than act symbolically as a ‘border guard’ facing the ‘other’ across the parapet of the boundaries of the sovereign state; indigenous people were and are actively challenging those boundaries, shaping its contours, and occasionally breaching the wall altogether.

In this article, I look at Bolivia as an example of how indigenous peoples have through history contributed to, challenged, and moulded the various states – from colonial to contemporary indigenous — over the past half millennium. I also explore the contemporary indigenous state and the ways in which the indigenous subject is imagined as the canonical citizen but ask if this move forecloses the possibilities of a radical critique of the sovereign state.

To mark the federation of the Australian colonies in January 1901, a re-enactment of the landing of British navigator Captain James Cook was performed at Botany Bay, New South Wales. This involved not only the arrival of Cook’s ‘discovery’ party ashore, but also a violent conflict with the local Gweagal/Dharawal people. The Landing Play brought together costumed professional actors and a troupe of Aboriginal performers from many parts of Australia. As indelible as the Cook landing story may seem as a foundational narrative replete with British flag raising performances, Australia’s national story has never been entirely unified, homogenous or settled. Spectacularly adorned in animal skins and bird feathers, the Indigenous troupe used sacred white clay to paint their faces and bodies in distinctive designs, signifying the deep history narratives of their respective Indigenous nations. Both the European and Indigenous Australian actors re-enacted histories associated with their respective ancestral heroes on lands they deemed sacred. These contested performances of sovereignty, of ‘landings’ and of history, were mutually witnessed and in conversation with each other. Yet, while contemporary politicians and elites were reifying Captain Cook’s legacy, much of the general audience ignored expectations, invading the VIP tent and cheering not the pompous Captain Cook oratory, but the Aboriginal actors who charged and attacked Cook’s party. A Maori Native Affairs Minister from New Zealand and three Maori chiefs watched the 1901 spectacle. In contrast to the Indigenous recognition enjoyed in neighboring New Zealand, the Australian government today continues to resist a constitutionally recognised Indigenous advisory body, let alone to discuss discrete parliamentary representation or a Treaty. Yet then, as now, multiple parallel sovereignties and their sacred histories continue to be enacted and re-enacted across the Australian continent.

Weaving Abya-Yala: The Decolonial Aesthetics of Indigenous Resistance
by Antonia Carcelén-Estrada (College of the Holy Cross)
»read the full article
Abstract and Keywords

From Mexico to the United States and Ecuador, indigenous uprisings inspire fear in the nation, which in turn sees itself forced to redefine its current formation. National projects expire, but peoples’ resistance continues, regardless of the form the state takes. Indigenous protest sporadically reaches the national stage and haunts the nation. Throughout Abya-Yala [America], indigenous aesthetic interventions, like dances, story-telling, gardening, and other practices of re-existence, seek to indict bad governance and localize other forms and meanings to ensure local communities outlive liberal and neoliberal national formations. Although indigenous resistance is socially and culturally encoded as eruptive, peoples have resisted the long night of coloniality all along, although indigenous resistance has been considered isolated incidents and not formative moments of the nation-state, peoples have resisted the long night of coloniality all along. Their common struggle for autonomy and self-determination also seeks good living with Nature. By comparing the Zapatista, Lakota, and Amazonian struggles to protect land, water, and life from each settler nation’s liberal beginnings into the neoliberal present, I show how these seemingly “isolated incidents” fit into continental patterns of indigenous solidarity. I weave these three examples to explore how indigenous peoples use decolonial aesthetics to defy conceptions of territory, property, and governance.