Do Women Benefit from Migration? An Editorial Introduction 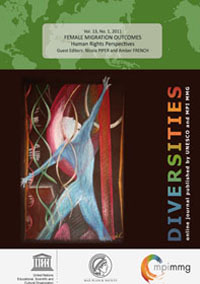 by Nicola Piper and Amber French
»read the full article

Migration flows from Latin America to North America and Europe have been subject to much scholarly interest and its feminization has also been noted.  Yet intra-regional migration flows in its gendered form have been subject to relatively little research. In the case of Chile, the country was known for several decades mainly as a country of emigration. However, since the 1990s and the end of the dictatorship, there has been an increasing influx of migrants, especially Peruvians.  Migrants’ vulnerability and marginalization from mainstream society are enhanced by their labour conditions and by different forms of social stratification that capture and classify them in ways unfamiliar to them. These conditions, as well as their situation in the country of origin prior to emigration, also influence their sense of entitlement and their notion of rights. While most migrants consider they deserve to be treated with respect given ‘their human condition’, not all articulate an entitlement to human rights, and even fewer articulate an idea of rights beyond labour rights that they are (or think they are) not in a position to demand.​
In this article we will discuss the diverse notions of rights held by Peruvian migrants, linking their understanding and practice to a combination of the following factors: a) their social and cultural capital; b) the length of their stay in the host society; and c) their understanding of rights vis-à-vis their country of origin and destination. By addressing the literature on human rights and citizenship, we aim to develop a more comprehensive approach to migrants’ rights.  This analysis is based on research carried out in Santiago de Chile between 2008 and 2009.  We conducted fifty in-depth interviews with Peruvian women workers and conducted a survey of the organizational landscape, interviewing key civil society informants.

Labour migration has profound implications for the reconfiguration of gender relations. Most of the literature has focused on the changing status of women in so-called ‘host’ countries. However, it is well recognised that migration creates ripples of change throughout the migration process, not just at destinations. In this paper we draw the readers’ attention to the changes that take place as a result of cross-border labour migration in places of origin. We focus on gender as an analytical concept, rather than just women as subjects. Through a comparative analysis of male-led and women-led migration, we analyse the changes that migration brings about for women in places of origin, particularly Bolivian and Peruvian cities. On the basis of in-depth interviews with women in low-income urban and peri-urban neighbourhoods we find that in both women-led and male-led migration patriarchal relations are challenged but then reconstituted.

In this article I investigate the development and evolution of diaspora associations with a particular focus on female (migrant) associations by using a case study of a Senegalese village community (Sinthiane) at home and away from home, in France. Focusing on women’s collective engagement, I argue that female involvement in diaspora associations and associational development are better understood by taking into account social and political change in the sending location. The argument is built on a gendered analysis of diaspora development engagement, focusing on the role of NGOs and policy programmes in the sending location and daily associational life in Sinthiane and France.
My analysis is based on 17 months of ethnographic fieldwork mainly in the suburbs of Paris, and in Senegal, in Dakar and in Sinthiane, a village in the north-east of the country.

Currently, nearly half of international migrants are women, and evidence suggests that migration flows and their impacts are strongly gendered. However, there is a striking lack of quantitative analysis of international migration’s impact on gender. This paper attempts to examine the challenges in cross-national measurement of women’s empowerment through migration as a contribution to an informed policy debate around gender, migration and empowerment. Since the focus of this paper is on identifying challenges in quantitative measurement of women’s empowerment, we use individual-level data from the Luxemburg Income Study (LIS) to examine migrant women’s socio-economic characteristics.  Data on educational attainment is used as proxy for social empowerment, while economic empowerment is measured using individual-level data on migrant’s occupation, job status, property ownership and net wage. Although aggregate data on female migration is essential to improve our understanding of cross-country differences in aspects of women’s migration, this paper emphasizes the need for more longitudinal data to identify barriers to women’s empowerment in destination and origin countries.  The paper makes several forward-looking conclusions that summarize the major findings and links them to data and measurement issues that need to be addressed in future research.

Shaking up the Grounds for Human Trafficking on Hispaniola
by Bridget Wooding (FLACSO, Dominican Republic)
»read the full article
Abstract and Keywords

The migration of Haitian women to the Dominican Republic is part of the so-called “feminization of migrations” caused by changes in labour markets as well as the precarious situation of women and their families in the neighbouring country of origin.  The sequel to the earthquake in Haiti on January 12, 2010 has aggravated gender violence, in the makeshift camps in which hundreds of thousands of displaced persons are still living a year later, according to the reporting of human rights organizations, international organizations, women’s organizations and ordinary citizens. Although the unprecedented urban displacement provoked by the earthquake has not led to a stampede of Haitians attempting to cross the border to the western side of the island of Hispaniola, it has exposed migrants, particularly women, to new situations of vulnerability which may lead to human trafficking.  This paper seeks to characterize the evolving situation. It examines how there is a new opportunity for civil society activists to direct attention towards possible humanitarian gaps as regards Haitian migrant women who have crossed the border, helping inter alia to strengthen protection measures across the island, in part because the issue of gender violence in Haiti has become more visible than previously.