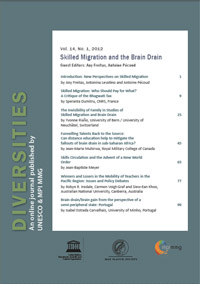 by Any Freitas, Antonina Levatino and Antoine Pécoud
»read the full article
Abstract and Keywords

Skilled migration has been the object of intense scientific and policy debates for nearly five decades. This is quite understandable, as few issues display greater complexity. Skilled migration is marked by a number of fundamental dilemmas and trade-offs, in terms, for instance, of conflicting rights to development, education, (e)migration and equality. It also often opposes political principles, ethical and political imperatives (such as global justice, individual freedom, or the control of people’s mobility), as well as actors (such as states, corporations and migrants themselves).
New ideas and perspectives have regularly reshaped the way skilled migration is apprehended; a few buzzwords – brain drain, gain or waste for example – have played a central role in embodying the key arguments and, in some cases, certain policy initiatives. These macro-considerations have developed along more detailed analysis, which addresses different aspects of skilled migration, with a particular emphasis on sophisticated empirical economic assessments of its impact on growth or development. In this context, contributions to this issue attempt to explore the different issues raised by skilled migration in a transversal manner. These include political implications, economic and policy impact, and ethical dilemmas. This introduction provides a short overview of the debates and of the main arguments developed in this issue of Diversities.

Skilled Migration: Who Should Pay for What? A Critique of the Bhagwati Tax
by Speranta Dumitru, CNRS, France
»read the full article
Abstract and Keywords

Brain drain critiques and human rights advocates have conflicting views on emigration. From a brain drain perspective, the emigration harms a country when emigrants are skilled and the source country is poor. From the human rights perspective, the right “to leave any country, including one’s own”1 is a fundamental right, protected for all, whatever their skills. Is the concern with poverty and social justice at odds with the right to emigrate? At the beginning of the 1970s, the economist Jagdish Bhagwati replied in the negative. He imagined a tax on the income earned by the skilled migrants in the destination country, to the benefit of the source country. He thus sought to reconcile the right to emigration and the brain drain effects2.
This article argues that there is no need to tax skilled migrants in order to reconcile the right to emigration and social justice. Social justice is not incompatible with the right to emigration but rather with restrictions on mobility. If it is both the case that equal opportunities are a minimal requisite for social justice, and that access to opportunities implies freedom of movement, as I shall argue, then the brain drain criticism doesn’t satisfy the minimal requirements of social justice.
The article is divided into three parts. Each part rejects one of the possible justifications of the Bhagwati tax, that is, as a way, for skilled migrants, (i.) to compensate the welfare loss occasioned to their country of origin; (ii.) to discharge for their obligation to the national community when it publicly financed their education; and (iii.) to compensate for the resulting inequality of opportunities between themselves and their non-migrant compatriots.

The Invisibility of Family in Studies of Skilled Migration and Brain Drain
by Yvonne Riaño, University of Bern / University of Neuchâtel, Switzerland
»read the full article
Abstract and Keywords

Despite being the dominant mode of legal entry for the past two decades in the European Union, few studies of skilled migration and brain drain have focused on the so-called ‘family migration’. Yet, recent studies suggest that many skilled immigrants, particularly women, are part of this category. This lack of interest for the family migration (and its economic impact) has also overshadowed the high-skilled profile (and potential) of many women who enter destination countries as family migrants. This paper examines the characteristics of the labour market participation of 50 skilled immigrant women from countries outside the European Union, including Latin America, the Middle East and South-eastern Europe, who have migrated to Switzerland in the context of family reunification. The author argues that if skilled women are able to achieve a professional integration equivalent to their skills, and develop networks of cooperation with other professionals in their countries of origin, the problem of ‘brain drain’ may be avoided and channelled towards ‘brain gain’. The empirical results of the qualitative study show that the majority of skilled women face the undervaluing of their credentials and work experience, which results in their underemployment. The question is thus raised if the debate around ‘brain drain’ should be in such cases reformulated in terms of ‘brain waste’, a phenomenon that not only affects the countries of origin but also the countries of destination. Finally, the paper examines the strategies that skilled migrant women develop to improve their integration into the Swizz labour market, which can ultimately lead to networks of cooperation with their countries of origin.

Funnelling Talents Back to the Source: Can distance education help to mitigate the fallouts of brain drain in sub-Saharan Africa?
by Jean-Marie Muhirwa, Royal Military College of Canada
»read the full article
Abstract and Keywords

This paper offers a critical reflection on theories supporting the positive consequences of brain drain (BD) in sub-Saharan Africa (SSA). It sides with the sceptics of the power of remittances alone to offset the bleed of highly skilled professionals and foster the development of SSA. It is argued that given the intensification of BD’s pull and push factors, stemming or reversing it will become even more difficult than it has been so far. Distance education (DE) is deemed to hold the potential to help tap into the BD pool of expertise and funnel it back home to contribute to the reconstruction of crumbling higher education (HE) systems in SSA. This brain circulation (BC) effort added to some benefits from remittances would help to alleviate the crippling effects of BD in SSA while, at the same time, allowing the majority of under-employed highly qualified migrants to stay current in their areas of expertise. Learning from DE past mistakes in SSA would foster the emergence of a more ecological DE approach that would foster more sustainable BC and thus mitigate the fallouts of BD.

Is the knowledge world organized differently today with respect to yesterday?
At the world level, observers used to highlight the asymmetry between the North and the South, which would shape the unidirectional flows of competence from the former to the latter. The ‘center’ would attract the brains and human resources in science and technology. Today, by contrast, one tends to stress the greater complexity of flows’ directions and the ‘circulation’ of brains rather than their ‘drain’. Some see this trend as making migration contribute to development. Others, in a more skeptical way, argue that the core features of the world have not changed.
This article does not aim at identifying which position is right, but rather at discussing the core arguments in this debate, on the basis of empirical evidence and of the interpretations it can be associated with. The first part analyses the evolution of data over the last decade. The role of diasporas is the object of the part 2, which demonstrates the potential, but not automatic, link between migrants and their country of origin. The third part connects the major transformations of the scientific and technological world with current and future mobility trends; if flows are less unidirectional than before, the social and political conditions in which they take place remains uncertain. In conclusion, the paper argues that the ‘circulation’ approach to migration, that is now at least a decade old, is going through a new phase and must therefore be reassessed.

The focus of much high skilled migration research has tended to be on health and IT professionals. This chapter addresses the mobility of school teachers in a geographic region that has received little attention, the Pacific. Unlike the Caribbean Islands and South Africa, the Pacific has not been the focus of much research into the demographic, economic and geographic factors impacting mobility, nor into the social, economic and demographic consequences of mobility.
Given the teacher shortages that are occurring in many industrialised countries on the Pacific Rim, (including Australia, New Zealand, Canada and the US) and the tailoring of immigration and long term visitor policies to attract highly skilled workers in areas of shortage, the Pacific could be affected. The article demonstrates that of three countries studied as part of a comparative project, only Fiji has been losing teachers to an extent that has been harmful to the country’s education system. Most mobility has been related to political events but, nevertheless, the negative consequences are a matter for concern. Australia has benefited from the immigration of highly skilled Fijian teachers and its aid policies could be used as one way of addressing the loss of skilled human resources from Fiji. This could alleviate some of the tension and go some way towards meeting the demands for compensation. Many of the debates surrounding skilled migration and brain drain are investigated in relation to Fiji where political instability makes this an even more interesting case to examine.
On the other hand, the Cook Islands and Vanuatu experience low levels of international teacher emigration and this situation will remain as long as many of their teachers continue to be trained to levels that are not acceptable in the labour markets of industrialised countries. This has mainly been a matter of a shortage of resources rather than a deliberate policy of ‘under-training’. If an upgrading of training does occur, however, the situation could change. This introduces a dilemma for these countries as they strive to upgrade qualifications and skills, as per the Millennium Development Goals, but seek to retain their own teachers.

Brain drain/brain gain from the perspective of a semi-peripheral state: Portugal
by Isabel Estrada Carvalhais, University of Minho, Portugal
»read the full article
Abstract and Keywords

This paper analyses the recent Portuguese governmental answers to deal with its semi-peripheral position in the science and technology market in general, and in the international market of brain circulation in particular. The management of brain circulation is understood thus as only a small part of a wider public policy regarding the management of scientific and technological production and dissemination, as well as the management of access to education and training resources.
This paper’s analysis of the public policy built to manage the country’s position in the international market of scientific and technological knowledge suggests that the country’s semi-peripheral condition in regard to various markets (economic, as well as cultural, scientific and academic) has been the dominant pillar of its policy’s structuring. It is thus through the lenses of its semi-peripheral condition that much of the country’s governmental answers become intelligible. A second dominant pillar is the European context and the consequent need to comply with the expectations raised by the Agenda of Lisbon. But, as the paper suggests, Lisbon’s Agenda has worked over the last years mostly as a political binder that has enabled the implementation of measures otherwise financially too heavy, while very much needed to bring the Portuguese scientific system closer to an increasingly competitive international market of science and technology.