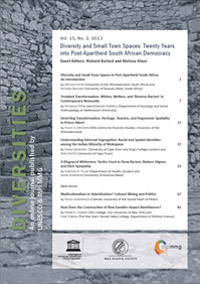 This paper is based on a study of four white families living in the town of Newcastle, South Africa, and focuses on the institutional apparatuses of welfare in the town almost two decades after apartheid. Beginning with a reading of the production of the category of the ‘poor white’ during the first half of the twentieth century, we then discuss the particular rise and fall of Newcastle as an industrial town. We focus on contemporary welfare in the town and the interaction between whites receiving welfare and welfare officials. In the midst of moral evaluations of character, it becomes clear to officials that models of individual reformation and transformation are inadequate to realise substantially improved lives. In these conditions, officials join white recipients in invoking ‘reverse racism’ to explain the continued reliance of these white families on welfare and their inability to improve their conditions, regardless of ‘improvements in character’. Such a claim, we argue, portrays whites as threatened and even attempts to re-claim the pathological figure of the poor white in a bid to remain exceptional, and thus to be recognised as being poor in a manner that would distinguish them from Africans.

Deserting Transformation: Heritage, Tourism, and Hegemonic Spatiality in Prince Albert
by Haley A. McEwen (Wits Centre for Diversity Studies, University of the Witwatersrand)
»read the full article
Abstract and Keywords

While tourism is often pitched as a panacea for economic growth in developing countries, it has also been shown to reproduce colonial dynamics of unequal power relations between the West and former colonies and between the historically privileged and the oppressed within post-colonial nations. Through critical discourse analysis of data, this article considers  how the mobilization of ‘heritage’ and ‘tourism’ by ‘semigrant power-elites’ in Prince Albert, a rural South African town, reproduces historically inscribed relations of power which remain shaped by the  apartheid era’s use of space in the construction and enforcement of a racial hierarchy.  Analysis aims to intervene in presumptions that tourism development is necessarily a path towards economic empowerment for historically oppressed populations. Interrogation of discourses promoting heritage and tourism development in the town uncovers the ways in which structures of inequality established through colonialism and apartheid can accumulate through tourism development.

Although South Africa’s history has brought a great deal of research attention to racial dynamics in the post apartheid period, much of this research has been on the largest demographic groups in urban centres. This study focuses on the spatial arrangement of minority identities, through continued informal segregation, among the Indian minority of Mokopane. Drawing on 28 open-ended interviews, segregation is explored in everyday interactions and spaces. Working within a spatial-discursive framework, observational, critical discourse and rhetorical analysis is employed. Participants’ discursive constructions overwhelmingly demonstrate patterns of informal segregation among the Indian minority community, within the micro-ecology of contact. It is argued that informal segregation acts as a regulator of hostile and hidden racism. In mapping the dialogue of the Indian minority, a story of the evolution of segregation emerges, which replicates internal divisions between the established ‘South African Indians’ and recent ‘immigrant Indians’. This study ultimately demonstrates the need for a spatial-discursive orientation and a more “embodied” turn in our understanding of segregation.

The stigma of being white in post-apartheid South Africa is a complex challenge. In 2008 the town of Swartruggens was discredited in the media following a shooting of black shack dwellers by a white Afrikaans boy, igniting racial tensions and creating a media narrative of ‘victimised blacks’ and ‘violent whites’. This paper discusses part of a broader study investigating social relations in the town almost a year after the shooting. This paper focuses on qualitative, open-ended interviews with white residents of the town, arguing that managing a stigmatised white identity involves producing a positive construction of one’s place of residence, since identity and place are interwoven. The discursive production of place-identity in dialogue and interaction tries to accomplish the tasks of reducing stigma, denying racism, and even eliciting sympathy. This paper also calls for a foregrounding of geographical location in work on identity construction.

Multiculturalism or Hybridisation? Cultural Mixing and Politics
by Paolo Gomarasca (Catholic University of the Sacred Heart of Milan)
»read the full article
Abstract and Keywords

The aim of this article is to analyse the recent debate on the end of multiculturalism. It has become a commonplace to say that multiculturalism has failed because of its presumed differentialism, i.e. its tendency to conceive different cultures as cognitive islands. The competing model is characterised by an intercultural approach. The article firstly intends to demonstrate that this is a false alternative within limits. Contrary to popular caricature, one version of multiculturalism is in fact attuned to the emphasis on cultural exchanges and connections. The problem is that the differentialist version has become the standard version of multiculturalism. That is why the article further argues for the importance of the concept of hybridisation as a way of moving beyond the controversy over multiculturalism’s supposed failures. Hybridisation suggests one aspect which can be considered relevant: Cultures are originally and intrinsically intertwined. Finally, the article investigates the political implication of this concept of culture and tries to justify the request that cultural mixing processes should be channelled within the political framework of democracy, especially at the level of civil society.

How Does the Construction of New Families Impact Remittances?
by Robin A. Harper (York College, City University of New York) and
Hani Zubida (The Max Stern Yezreel Valley College, Department of Political Science)
»read the full article
Abstract and Keywords

Remittances are a multibillion-dollar industry. Due to the global financial crisis, remittances are an increasingly important issue. Historically, most scholars have considered remittances as an economic phenomenon, exploring the financial impact on individuals, families, communities and the state. These scholars provided insightful models on remittance motivations but assumed that remittance decisions were static. The “social remittances” literature complemented this work and considered remittances beyond their financial utility. Building our analysis from interview and survey data with migrant workers in Israel, we engage this idea of remittances as more than an economic event and explore the meaning of remittances to senders. We contend remittance practices are dynamic, and that people choose to remit or cease remitting at different times for different reasons. We introduce the idea of the ‘new family contract’ to explain why over time people change remittance practices, including ceasing remitting, a concept substantially less discussed in the literature.