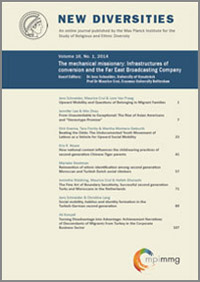 From Unassimilable to Exceptional: the Rise of Asian Americans and “Stereotype Promise”
by Jennifer Lee (University of California, Irvine) and
Min Zhou (Nanyang Technological University, Singapore)
»read the full article
Abstract and Keywords

Less than a century ago, Asian Americans were described as illiterate, undesirable, and unassimilable immigrants, yet today, they have the highest educational outcomes, highest rates of intermarriage, and lowest rates of residential segregation. Some scholars and pundits have attributed the dramatic change in their status to Asian culture and values. Focusing on the educational attainment of 1.5- and second-generation Chinese and Vietnamese, we argue that there is nothing essential about Asian culture or values that promote exceptional outcomes, but, rather, a circular process unique to contemporary Asian immigrants in the United States. Contemporary Asian immigrants are, on average, highly-educated and highlyselected—what we refer to as “hyper-selectivity.” Because of their hyper-selectivity, Asian immigrants import class-specific cultural institutions and practices from their countries of origin, including a sophisticated system of supplementary education, which they recreate in the United States. Consequently, stereotypes about Asian Americans are positive, and become a form of symbolic capital, which result in “stereotype promise”—the promise of being viewed through the lens of a positive stereotype, which, in turn, can enhance the performance of Asian American students. This generates a self-fulfilling prophecy of “Asian American exceptionalism”, and reproduces inequalities at the high end of the educational distribution, giving Asian American students a distinct advantage in the domain of education.

Beating the Odds: the Undocumented Youth Movement of Latinos as a Vehicle for Upward Social Mobility
by Dirk Eisema, Tara Fiorito and Martha Montero-Sieburth
(University of Amsterdam)
»read the full article
Abstract and Keywords

Drawing upon ethnographic research of in-depth interviews, life histories, attendance at rallies, festivities, and informal conversations with over 150 undocumented Latino youth activists in Los Angeles, we argue in this paper that the political and civic engagement of marginalized and stigmatized undocumented youth enables them to have social mobility prospects. Contrary to the U.S. literature on undocumented Latino 1.5 generation, which tends to focus on their socio-economic and educational disadvantages and overlooks the ways in which undocumented youth movements in the US enhance their social mobility through higher education, our findings indicate that Latino youth from low income neighborhoods embrace their undocumented identity, to become individually and collectively de-stigmatized and empowered. Re-appropriating education to their advantage, they develop professional activist dispositions that fuel their self-confidence, and overcome fear of governmental authorities. Moreover, they also use the movement’s networks for jobs, internships and funding, which in turn enhances their collective action towards beating the odds and climbing the ladder of social mobility.

Amy Chua’s 2011 memoir evoked heated debate on the childrearing practices of Chinese ‘Tiger Mothers’ and on how some Chinese ethnocultural values can push children toward academic success. To date, little scholarly attention has been paid to the childrearing practices of second-generation Chinese or to how they may influence this part of their children’s assimilation. I conducted in-depth interviews with second-generation Chinese parents in the United States and the Netherlands in order to examine specific ethnocultural socialization techniques that could boost children’s academic outcomes. Findings show that national context—focusing on different school systems and social security safety nets—can act as an intervening variable by affecting the intergenerational transmission of ethnocultural values regarding educational expectations and academic outcomes. U.S.-born Chinese parents continue to channel their offspring towards high educational achievement, while their peers born in the Netherlands instead emphasize the importance of their children’s free choice and their happiness.

In this article, a trajectory of immigrant incorporation is identified among ethnic minority social climbers that is characterized by reassertion and reinvention of ethnic identity in early adulthood. In-depth interviews with university-educated, second generation Moroccan and Turkish Dutch show that ethnic identification is relevant for minority social climbers, contrary to what is often assumed. However, this ethnic identification is not a static and self-evident given. This study once more illustrates that ethnic identification not only varies between individuals within an ethnic group, but also varies over time and between contexts. It shows how trajectories of social mobility affect the ethnic identifications of minority climbers and reveals the important role of co-ethnic, co-educated peers. The findings suggest that middle-class segments emerge that articulate their ethnic distinctiveness.

This article investigates in what ways the highly educated second generation of Turkish and Moroccan descent in the Netherlands deal with the increasingly impermeable, bright boundaries in various fields in Dutch society, including the labour market.  We find evidence that these individuals employ a strategy of sameness and difference throughout their careers to deal with societal and work-related boundaries. Their emphasis on professional sameness opens up ways to relate to and instil confidence among colleagues with a background of native parentage. They avoid giving up parts of their identity through assimilation by keeping their differences in place where it matters most to them. This juggling of sameness and difference seems to be an individual and situational balancing act, based on an awareness that boundaries exist, and a sensitivity towards dealing with them.

Social mobility literature widely assumes that socially upward mobile individuals ‘alienate’ from their ‘milieu of origin’ while adopting the patterns of acting and thinking of the ‘new milieu’. The most frequent underlying concepts are the ‘habitus transformation’ or even the ‘habitus cleft’, which presume that the acquisition of a new habitus necessarily involves moving away from the previous one. This article presents three contrasting case studies from a research project among socially upward mobile individuals of Turkish background in Germany to show that the static juxtaposition of ‘either … or’ is too narrow. Most respondents maintain intensive relations with family and friends from their ‘milieu of origin’, while at the same time ‘assimilating’ to the expected habitus in their professional environments and high-ranking positions. This article suggests borrowing elements from Identity Theory – especially concepts such as hybridity and multiplicity – to show that transformations in individual habitus do not necessarily go along with relevant levels of ‘alienation’ in neither direction. As a consequence, the authors propose ‘habitus diversification’ as a more promising concept for including frequent bridging strategies and the active switching between ‘habitual’ codes and languages.

Turning Disadvantage into Advantage: Achievement Narratives of Descendants of Migrants from Turkey in the Corporate Business Sector
by Ali Konyali (Erasmus University Rotterdam)
»read the full article
Abstract and Keywords

While researchers have often studied descendants of migrants in terms of their educational and occupational shortcomings, there is a lack of studies on an emerging group of professionals with exceptional achievements. Drawing on data collected through semi-structured, in-depth interviews in Frankfurt am Main, Paris and Stockholm with business professionals whose parents migrated from Turkey, this article explores how they present their stories within the framework of struggle and success, while they try to avoid victimization. Their narratives emphasize the benefits of being exceptional and different in the competitive context of the corporate business sector, with its emphasis on innovative performance. In the face of group disadvantage, they differentiate themselves from other descendants of migrants from Turkey (with less successful careers) by stressing the role of personal characteristics and individual achievements. This is a common feature in the respondents’ narratives in all three sites.