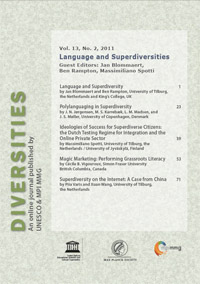 This paper explores the scope for research on language and superdiversity. Following a protracted process of paradigm shift, sociolinguistics and linguistic anthropology are well placed to engage with the contemporary social changes associated with superdiversity. After a brief introductory discussion of what superdiversity entails, the paper outlines key theoretical and methodological developments in language study: named languages have now been denaturalized, the linguistic is treated as just one semiotic among many, inequality and innovation are positioned together in a dynamics of pervasive normativity, and the contexts in which people orient their interactions reach far beyond the communicative event itself. From here, this paper moves to a research agenda on superdiversity and language that is strongly embedded in ethnography. The combination of linguistics and ethnography produces an exceptionally powerful and differentiated view of both activity and ideology. After a characterization of what linguistic ethnography offers social science in general, this paper sketches some priorities for research on language and communication in particular, emphasizing the need for cumulative comparison, both as an objective in theory and description and as a resource for practical intervention.

Humankind is a languaging species. This means that as human beings we use language to achieve our goals. Every time we use language, we change the world a little bit. We do so by using language with other human beings, language is in other words social. In this paper we challenge one of the most widely held views of language as a social, human phenomenon, namely that “language” can be separated into different “languages”, such as “Russian”, “Latin”, and “Greenlandic”. Our paper is based on a recently developed sociolinguistic understanding that this view of language can not be upheld on the basis of linguistic criteria. “Languages” are abstractions, they are sociocultural or ideological constructions which match real-life use of language poorly. This means that sociolinguistics – the study of language as a social phenomenon – must work at another level of analysis with real-life language use. The first part of our paper presents such analyses of observed language use among adolescents in superdiverse societies. We show that the level of a linguistic feature is better suited as the basis for analysis of language use than the level of “a language”. In the second part of the paper we present our concept of polylanguaging which denotes the way in which speakers use features associated with different “languages” – even when they know very little of these “languages”. We use the level of (linguistic) features as the basis for understanding language use, and we claim that features are socioculturally associated with “languages”. Both features individually and languages are socioculturally associated with values, meanings, speakers, etc. This means that we can deal with the connection between features and languages, and in the analyses in the first part we do exactly that.

Ideologies of Success for Superdiverse Citizens: the Dutch Testing Regime for Integration and the Online Private Sector
by Massimiliano Spotti (University of Tilburg / University of Jyväskylä)
»read the full article
Abstract and Keywords

This article deals with the testing regime of integration in the Netherlands. More specifically, it shows how a monoglottal and monocultural ideology inhabits the political discourses issued and authored by agencies within the Dutch government when dealing with testing for both admission (toelating) and civic integration (inburgering) of (newly arrived) migrants. Further, it shows how a vigorous private online sector in Dutch language courses has grown up, and has utilized semiotic resources that present Dutch language as the vehicle through which migrants can deliver a positive contribution to social cohesion in mainstream society. The article concludes by advancing some reflections on two issues. First, on what it means to know a language. Second, on the construction of the migrant as an economic actor whose chances for social upscaling are based on the amount and level of certifications one can afford to purchase.

This article shows how socially stigmatized ways of writing may be commodified by the scribers themselves in order to reap symbolic and/or economic benefits. I illustrate this point by examining African marabouts’ advertisements in France and the way they are read by the French. These cards promote marabouts’ spiritual powers with promises to bring back unfaithful spouses and, among other things, success in business. I argue that what French readers interpret as grassroots literacy should instead be analyzed as astroturf literacy, i.e. literacy that imitates or fakes popular grassroots ways of writing. I submit that display of seemingly poor literacy is an essential part of marabouts’ doing being African: By performing ‘non-standard’ literacy they become ‘authentic’ Africans, and therefore legitimate clairvoyants, according to the set of fantasized sociocultural stereotypes. Yet, by recycling socio-cultural stereotypes, the marabouts participate in the re-production of the social and moral orders that enable the possibilities of French readers’ meaning-making.

Superdiversity on the Internet: A Case from China
by Piia Varis and Xuan Wang (University of Tilburg, the Netherlands)
»read the full article
Abstract and Keywords

The Internet is the superdiverse space par excellence – a space of seemingly endless possibilities for self-expression and community formation. Yet, online environments are not characterized only by happy heterogeneity: rather, we are able to see multiple layers of normativity in the form of self-, peer- and state-imposed norms. That is, though allowing for the continuous diversification of diversity, the Internet is also a space where diversity is controlled, ordered and curtailed. This paper illustrates these dynamics through an examination of a Beijing-based rapper and his online activities. What emerges from this investigation is a superdiverse as well as normative space where diversity is constrained by a complex of normative struggles, as new forms of meaning-making are accompanied with new systems of normativity. The driving force in such increasingly online normative processes is, instead of locality or localization, the quest for authenticity.